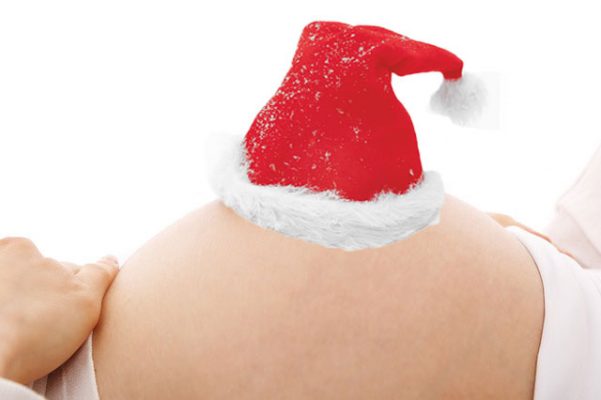 How to get through the festive season with a baby bump Ok let’s address the elephant in the room first. Listeria. Your doctor or midwife has probably already given you information on listeria and advised that you take precaution to avoid foods at high risk of containing the listeria bacteria. This can be a topic that divides pregnant mums but let’s look at it in the context of the festive season.

Listeriosis is a serious infection caused by eating food that is contaminated with listeria bacteria. Symptoms can include fever and flu like symptoms such as muscle aches and fatigue as well as nausea and vomiting. Listeria can live in your system for up to 70 days before symptoms occur, though the average presentation of the infection is around 3 weeks. Listeria can be fatal to an unborn baby and even a newborn and can cause miscarriage or stillbirth.

The recommendation to take precautions to avoid high risk foods is never more pertinent than during the festive season. You will notice a lot of high risk foods at Christmas parties and functions because they are often finger foods and easy to serve and eat. While the risk of contracting listeria is low, poor food handling can increase the likelihood of listeria being present. The complicating factor about the festive season is that food is often left out at room temperature for extended periods giving the bacteria the best chance to grow. So what are the high risk foods we should avoid? Foods that we find appealing most of the time at parties of course!

So what should I eat?

If you are at an event that serves a sit down meal, then the risk of being served high risk foods is low. You can eat cooked meats, including deli meats as well as fish that has been cooked above 75 degrees. So chicken parma is still on the menu!

Pastas with sauces will be fine as long as they are eaten hot and while bread is safe to eat, you might want to check what it has been topped with.

The overall message is that if it has been cooked and it is hot it is ok to eat.

And then there is alcohol

I think we all know by now that it is recommended to avoid alcohol during pregnancy. For some women, not having a drink can be a dead giveaway that you are pregnant while you might still be trying to conceal it. So how do you hide the fact that you are not drinking alcohol?

If its really important to you to not start a conversation about whether you might be pregnant, then here are some tips you might use: So it is possible to survive the festive season without eating high risk foods or giving away that you are pregnant before you want to. Taking precautions during the festive season is wise however, if you accidentally eat a high risk food, it is not reason to panic. Listeria infection is fairly rare – about 65 cases per year in Australia with about 7 of these being pregnant women. However if you do notice any of the symptoms mentioned above and think you may have been exposed to listeria, see your doctor immediately so that you can get treatment as soon as possible.

So here’s to a healthy and fun festive season. Enjoy a festive orange juice instead of champagne

This website uses cookies to improve your experience while you navigate through the website. Out of these, the cookies that are categorized as necessary are stored on your browser as they are essential for the working of basic functionalities of the website. We also use third-party cookies that help us analyze and understand how you use this website. These cookies will be stored in your browser only with your consent. You also have the option to opt-out of these cookies. But opting out of some of these cookies may affect your browsing experience.
Necessary Always Enabled
Necessary cookies are absolutely essential for the website to function properly. This category only includes cookies that ensures basic functionalities and security features of the website. These cookies do not store any personal information.
Non-necessary
Any cookies that may not be particularly necessary for the website to function and is used specifically to collect user personal data via analytics, ads, other embedded contents are termed as non-necessary cookies. It is mandatory to procure user consent prior to running these cookies on your website.
SAVE & ACCEPT